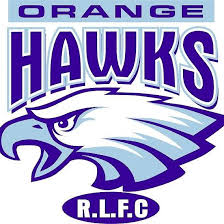 Despite being without their in-form half back Ray Talimalie, Orange Hawks still managed to save the day and get over the top of Lithgow Workies Wolves in a hard-fought, and high-scoring, game at the Tony Luchetti Sportsground, in Lithgow, on Sunday.

The win puts the Hawks in line for the minor-premiership. They currently sit at the top of the ladder, and are 3 points ahead of the Cowra Magpies, in second place.

Orange Hawks had their match-plans thrown into disarray ahead of Sunday’s game, following the detention of Talimalie, who apparently breached bail conditions in relation to a matter at Young, prior to his joining the Hawks.

It had little impact on the outcome of the game, with Orange Hawkes winning outright, 38 to 26.