Sunday Nights on 2LT at 10pm 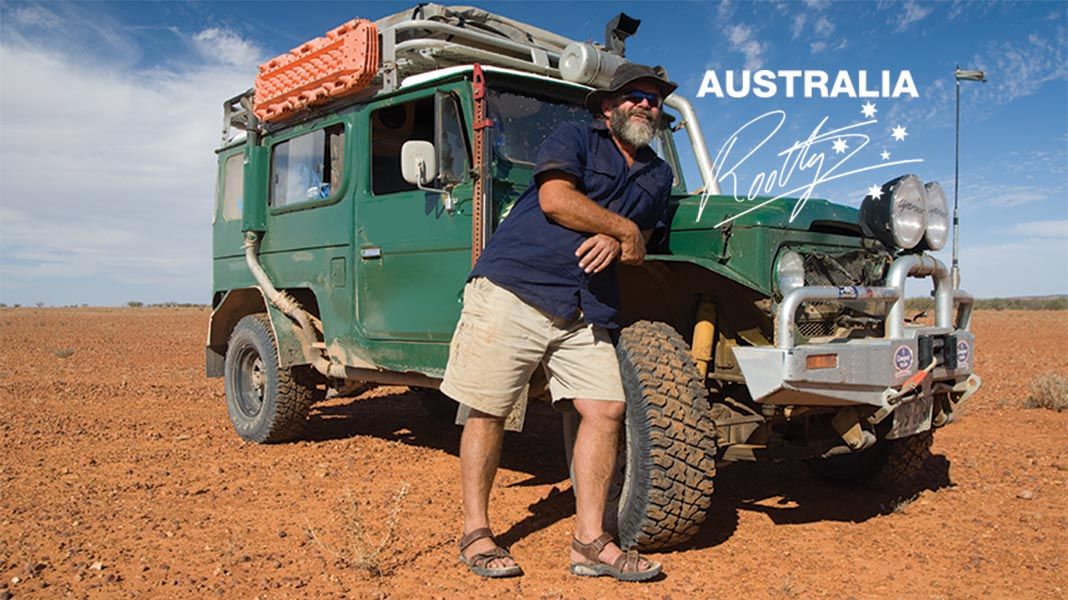 John ‘Roothy’ Rooth is an icon in the Australian 4WD community, and he’s got plenty of good yarns to tell. Kick back late on Sunday nights with Roothy and the Duck as they talk about the outback, four wheel driving, and all things Australian.

Roothy’s Australia is broadcast every Sunday night on 2LT at 10pm.

About Roothy (in his own words):

I spent most of my childhood in the remote northern Flinders Ranges in South Australia educated on a pedal radio and in the sheep sheds and back blocks of a station where it took three days to ride the fences. Seventeen schools later I did my final year in Armidale NSW before working as a bridge carpenter in the remote hinterland behind Walcha and Kempsey.

A motorcycle racing accident saw me in hospital in Sydney looking for less physical work for a few years. I took a scholarship to train as a High School English/History teacher and went back to Armidale to Uni.

At Uni I came under the spell of Russel Ward, the Aussie historian best known for his book ‘The Australian Legend’ that promoted bush values and egalitarianism as the major influences on Australian culture. Ward’s view that the typical Aussie was a ‘practical man, rough and ready in his manners. Stoic, capable of great energy and resourcefulness…but inclined to laxity too’ could have been plucked straight from any of my school reports…

After a year and a half’s teaching at various high schools throughout NSW the education department’s ‘bonding scheme’ was cancelled and I decided to head bush again.

Eventually my brother an I settled in Lightning Ridge to use that town as a base for prospecting and bush working expeditions across the country. Working for ourselves and building all our own equipment from scrap we were the first miners in Australia to experiment with floating vacuum dredges in the creeks around the old gold fields in Victoria and southern NSW. These trips used to involve penetrating deep into the bush on foot, dragging our equipment up stream and living off the land for weeks at a time. We did however extract plenty of alluvial gold at a time when prices were running at a record $300 an ounce.

Most of that money went towards machinery for our opal mining operations in the Ridge, open cut sapphire and emerald work in the far west and some seam opal prospecting in South Australia. Some of it went towards paying fines for being outside the designated areas.
During those bush years I worked on cotton machinery – big bulldozers and plough sets – and maintained and drove harvesters on the big crops out west too. I ran a couple of teams of Kiwi shearers during the ‘Wide Comb’ disputes and it was there I first learnt to cook in abundance when one team’s cook took a turn at the bottle and left. I also worked on occasion as the ‘temporary’ librarian at the local primary school in Lightning Ridge and was known amongst my peers for my ability to fix almost anything with wire and tape.

At this stage I started freelance writing for various magazines, including a couple of years as ‘Madame XXXX’, the astrologist for a well known woman’s magazine. One of these jobs became a regular and when we finally tired of prospecting seven years later I went to work as a temporary sub editor for ‘Two Wheels’ motorcycle magazine at Federal Publishing Company in Sydney. The temporary position became permanent and a year later I was made Editor of his first magazine.
1986 to 1992 saw a stella rise through magazine publishing ranks culminating in the Managing Editor position with some 42 lifestyle titles under my control. But the pressure of city life as a single man was too much and I went bush again, this time armed with plenty of magazine experience and contacts that ensured a steady flow of freelance writing and photography packages to this day.
At one stage I combined my passion for motorcycles and the bush with a few years as part owner and operator of a trail bike tour company specialising in taking groups of Japanese and American riders on trips through the outback. This gave me plenty of first hand experience of central Australia, Cape York and the Gulf country as well as the Kimberley region along with lots more stories to tell.
123456

My freelance work took off with the boom in the 4X4, caravan and camping lifestyles in the mid 1990’s and with so much genuine mechanical and outback experience it wasn’t long before ‘Roothy’ had become the number one name in the field. This led to a fifteen year career presenting 4WD Action DVDs which involved traveling all over the country again but this time in a truck I built myself, ‘Milo’ the old Toyota.
Unlike other people working in the field, I’ve kept evolving the same old $500 truck, proving you didn’t need the latest and flashiest machinery to travel the bush. My reputation as a bush mechanic with a love of Australian history grew almost as quickly as my reputation for unusual bush cooking.
Meanwhile 4WD Action grew from nothing to sales of almost 70,000 per issue, making it the second largest selling men’s magazine in the country. I became the number one attraction at the major outdoors Expos around the country like the Melbourne National 4×4 Outdoors, Fishing and Boating Expo, the Sydney 4WD and Adventure Show, the Brisbane National 4×4 Outdoors, Fishing and Boating Expo, the Perth 4WD and Adventure Show and the Adelaide 4WD and Adventure Show.

All this led to me kicking off the ‘Get Out There’ campaign aimed at getting Aussies to get out and experience their own country first. I was also the man behind ‘Unlock Australia’, the not for profit organisation dedicated to keeping Australia’s public lands un-gated and free. Both these campaigns are ongoing and in both the 2013 and 2016 elections I stood for the Australian Senate to raise awareness of the issues facing bush tourism and the bush itself.